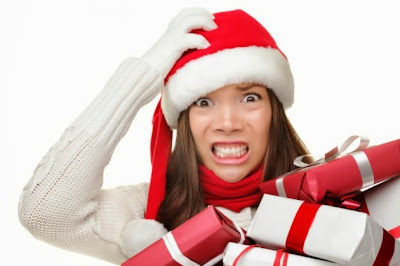 YES - Virginia there is stress. However stress does not have to be a bad thing - there is both good and bad stress - stress that energizes - stress  that debilitates - physical stress and emotional stress - real stress - perceived stress - anticipatory stress - situational stress - encounter stress - time stress. Everyone has to cope with stress - children as well as adults - singles as well as couples. Stress can cripple - bring things to a screeching halt - ruin events and projects - or - it may stimulate - challenge - create - results beyond ones wildest dreams and expectations. All of us experience stress - Santa has stress (thank God for the space time continuum - just ask Albert Einstein or Doctor Who?) - God has stress - Jesus had stress. Bottom line - it is how you manage stress and what YOU choose to do with it - that determines if it ends up being a positive or negative experience.  Christmas season is stressful - invite Jesus into your heart and let Him help you enjoy it! 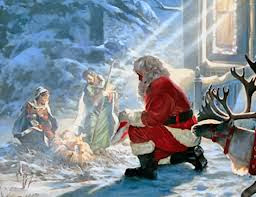 
Yes I want you to enjoy MY Christmas! Enjoy the gatherings - the gift exchanges - the food and drink - the festivities - and - remember the reason we celebrate Christmas in the first place. Remember that Jesus was born to us -
Because God Loves Us!

Jesus came to us - a gift from God - because He loves us and wants us to experience life to the fullest in all we do - at home - at work - at church - in the temple -in our minds and hearts - and mostly in our hearts.

Recently I watched a movie called "Switchmas" on Netflix  - a story about a young Jewish boy obsessed with Christmas - his efforts to become a part of the Christmas holiday - all the small things that make Christmas so special for people around the world. Switching identities with another young boy on his way to visit relatives at Christmas Town in Washington State - provides the opportunity to become immersed into the traditional Christmas activities. Experiencing the twist and turns of the story - happy moments as well as unhappy - the Jewish lad finally figures out how - as a Jewish person - he may become a part of the Christmas holiday. I won't reveal what he does - only to say that through the course of the movie an interesting fact was revealed to the audience - many of our popular Christmas songs were written by non-Christians! Another point that was brought up - by the actor playing the part of an adult Jewish man - who played the part of Santa Claus - who else is free on the holiday to be Santa  - if not a Jew - he exclaims. The proclamation at the end of the movie - Christmas is for everybody - not just Christians - not just believers - but everybody! 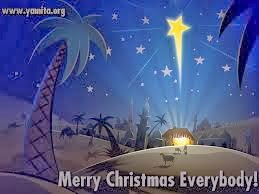 This has implications - especially for those who profess no belief or question the existence of God - Jesus - the value of religion - the value of religious holidays. Whether they want to or not - they are as involved in Christmas - Easter - Hanukkah - Yom Kippur - Ramadan - Kwanzaa - Eid-al-Adha - among others - as those of us who do observe these. The non-believer who sells items used in the observance of any of these holidays - the person who works on one of those days - so others may actively participate - all the atheists and agnostics that work - manufacture - buy - sell -service any of the thousands of products used by or in these celebrations - are themselves involved in the very things that they profess no belief or interest in. Like it or not - all of us - are involved in others observances. When we hear of a legal case involving the ACLU - we become involved. When we hear of any religious holiday - we become involved. The level of involvement will vary greatly - but even in a very small way - we become involved. Only those who are dead - or brain dead - can claim total uninvolvement - the remainder of us - share in each other's holidays and beliefs.

That is as it should be - I am not only responsible for my life - but also for how I relate and react to your life - we are more connected to each other than we realize.  Jesus said He came not for all - but for many. He knew some would reject Him - that is OK - it is your free will to accept or reject.  For me and my household - we will serve The Lord.