According to the Urban Dictionary - Besties - are "friends who have each other's backs, look out for each other, spend lots of time together, and are just really good friends. They have inside jokes together, they go to the park and swing on swing sets, get ice cream, go to the beach, go to concerts, go bowling, and basically any activity that they like doing together as friends." Most people will have at least a few besties - other people - usually not family - who are there to help and support - even when not asked. They know what is happening in your life - they know when you are happy or sad - they know when you can stand on your own feet or when you need help getting around. Life without even one or two besties would be less fulfilling - less fun - less tolerable. Casual acquaintances come and go - here today - gone tomorrow. Besties are here - now and forever - even when separated for long periods of time or great distances. As each of us walks the path of life - we experience life not only in the times and events that occur -  but also - in the people who come in and out of our lives. Above all else - it is people who add the real color - the real flavor to our lives.

As Christians - we rejoice in the knowledge that Jesus has always been there for us - waiting - watching - helping - protecting - guiding - healing - forgiving - completing - our lives. He is the one very true constant in our lives - even in those moments when we doubted His presence - doubted His words - doubted His love. When we look back in our lives and see Jesus so far away from ourselves - we need to ask "who moved" - not Him - He is after all a constant. Jesus is our first Bestie - if you cannot see Him at the moment - just turn around - He is standing there - right next to you - waiting for you to welcome Him -back into your life.

Earlier this Spring farmers everywhere were busy spreading various seeds in the ground after tilling and preparing the soil for a new crop. It doesn't make much difference what seed they were planting - the process is basically the same - prepare the soil to make it receptive to accepting the seeds - adding fertilizer and weed killer where necessary - then physically spreading the seed - hoping for a rainfall to settle the seed and begin the process of germination. Then the waiting game - waiting to see the first signs that the seed took hold - sprouted - poked its tiny green head above ground. Most of the seed normally takes root - with continued care in the early days - roots go deep and a healthy stand appears in the field. Not all seed germinates - not all seed grows - some withers and falls by the wayside - to be thrown in the trash later in the growing season. 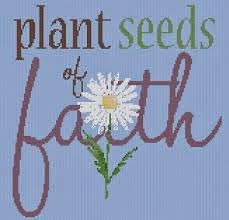 In today's Gospel - Jesus shares the parable about the seeds - some falling on good soil - some falling on rocky ground - roots that do not grow deep - seed surrounds by thorns - His seed the Word of God - His parable - how different people receive His seeds - the Word of God tickling their ears - in the end not always providing growth in the person's life - not showing growth in the community. As much as He warns - the people - those who have ears - need to hear - those who have eyes - need to see - His warning is also to those who preach. To bishops - priests - deacons - He tells us - give the people real food - preach His Word - honestly - completely - give the people something they can sink their spiritual teeth in - not the fluff and warm fuzzies preached by too many these days. It is not about feeling good - rather being good - it is about hearing the truth - spoken in Love - Truth that admonishes - teaches - encourages - inspires. His Word gaining for His Heavenly Father true and honest disciples - disciples who are more numerous than all the ordained clergy in the world - those disciples - joining with the ordained - to spread His Gospel message - of Love - Forgiveness - Reconciliation - Salvation. Jesus says forget the fluff - the boring - feel good homilies and sermons - instead plant seeds of faith - seeds that produce mature and faithful Christians.

A beast of burden is typically a pack animal used to carry or move heavy objects - as compared to draft animals which are used to pull a load behind themselves. Common pack animals would be elephants - camels - horses - reindeer - dogs - mules - donkeys. Although termed "burden" - the weight these animals are asked to carry are reasonable given their size and load weight. Humans would normallly not be considered a beast of burden - the term loosly applied to humans who are asked to bear emotional burdens of a serious nature - beyond that which the typical person would be able to cope with. Most people cope with the stresses of normal life in very good syle - on ocassion - some expereince issues that seem to snowball and grow in size well beyound that which anyone would normally expect to bear - reaching a critical point where the person finally collapses - usually emotionally. 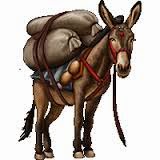 In Matthew 11 Jesus tells us "come to me all you who labor and are burdened - and I will give you rest - take my yolk upon you and learn from me - for I am meek and humble of heart - and you will find rest for yourselves - for my yolk is easy - and my burden light".  The yolk that He asks us to share is His commitment to love all - equally - fairly - with no judgement - it is not a yolk of wood - rather a circle of love - we are asked to love all as He loves - to help all  - to open ourselves to the presence of Christ in those whom we meet - to bear the burden of His love - carried joyfully for all.
.
Deacon Dale

I find it very frustrating that so many people - organizations - special interest groups - use scare tactics - when recruiting or promoting their agenda or business. We have become a nation of fear - afraid of what might happen if we fail to join - participate - buy into whatever is being handed to us. Recently I received a letter informing me that our local county had finally received voter approval to negotiate electrical rates for the people of our county. It is called aggregation - putting all homes into one large buying group - creating a large body of consumers into one bargaining unit with the hope of getting lower electrical rates - saving everyone money in the process. I was shocked - as I read the letter - that the bargain rate - locked in for the next three years - was no bargain at all. Verifying my purchase history I verified that I was - and currently am paying only 63% of the rate offered to the group. I called and opted out - wondering how many homes were mislead and signed up for the bargain rate because of the threat of an increase that very likely will never happen. I could be wrong - maybe I am lucky to get a fantastic rate since my home is total electric - maybe I am one of the lucky ones. It is not only electric rates that people fear - gas prices fluctuate daily - keeping people trapped in their homes - afraid that they will spend their life's savings on a long awaited trip - vacation - shopping spree. Some religions take the same tactic - don't be left behind - commit today - you know not the day or the hour - convert before it is too late. 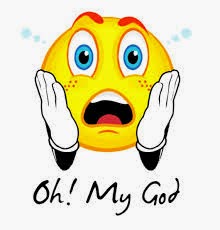 It is true that we do not know the day or hour when Christ will return - but our God is a merciful God - slow to anger - quick to forgive - His Divine Mercy - unmeasurable. It would be incompatible with all we know about Jesus - with God - for Him to swoop down upon mankind - in an instant - giving no time to act - to react - to repent. He warns us constantly - in the end - when the end comes -  I have to believe - He will be compassionate to all - one last time - no scare tactics -  in truth - with love.