The term - Up in arms - simply - protesting vigorously about something - anything. Whenever anything happens that does not resonate well with a large group of people - those same people will protest - loudly - creating enough attention - gathering interest - pro and con. It is a sad statement that in this time of our country - that so much unrest exists. For many of us - myself included - it had appeared that the USA was finally starting to pull together - following on the heels of - 911 - fifteen years ago - the nation coming together - arm in arm - united as one body. The unity that existed fifteen years ago has faded - a mere memory for many. Today it is -one for all - myself against the world attitude -exhibited by so many - angry - unhappy - violent people. Refusing to accept - to tolerate - to understand - to learn. Much of this driven by politicians - people elected - to serve the people - through twisted truths and outright lies - all in the name of politics - driving one against another - bad examples to the general population - encouraging too many copycats - for selfish reasons.

I Told You So

Yes - I did - in my last post I mentioned that I would be slowing down in the frequency of my posts - summer here has been very busy - no time to sit on the computer to blog. Since my last post I have been very busy - mainly refurbishing our deck - or I should say deck system. You see our "deck" is a system of decks and bridges - five decks and two bridges - almost 1300 square feet of decking - plus built in seating. Luckily the 16 ft x 16 ft deck has a gazebo on it to provide protection for our hot tub so that deck requires very little maintenance. The other 1000 square feet is another story. This year the maintenance included power washing - sanding - water proofing. Power washing takes a few hours - sanding a few days - staining another two days when the weather cooperates. As my wife says - "i'd rather have a root canal than do this again" - and I can't blame her. All total the project took us some 60 hours spread over 8 days. In addition - I have been coping with a leg issue - five doctors visits - two x-rays - three MRIs - still no conclusive answer - now into my third week of physical therapy - the leg still hurts. With the slow results - we have cancelled our plans to return to Spain to continue our Camino adventure. I also spent over sixty hours producing a video on The Holy Land - for a presentation I made at St. Mary's Church in Bristol, Indiana at the end of July. Link to the video is below> 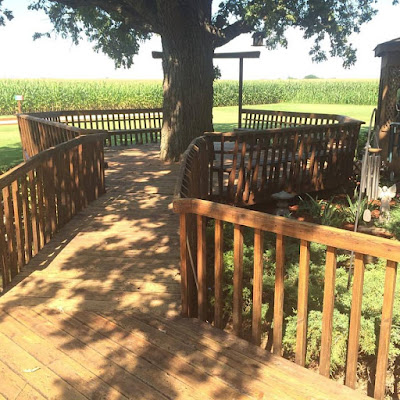 All these distractions from enjoying the summer has only slightly interfered with our summer plans - we still have had time to socialize - enjoy time with family - friends - attend to deacon duties at church - prepare homilies for Holy Mass - attend to God's business. As in other seasons of our lives - God still remains our primary focus - sharing the gift that He so freely gave us. We have been blessed indeed - hopefully sharing with all the joy of our personal relationship with Jesus - encouraging others to keep their focus - even when very busy - on the real reason for our lives.