Thursday - January 17, 2019 - the angels and the people of God cried at the news of the death of Father Jerome Zalonis MIC - fondly known as Father Jerry.  Ordained on May 23, 1959 - along with his twin brother - Father John Zalonis - Father Jerry served the Catholic communities of believers in numerous locations - his final assignment at St. Patrick Parish in Yorkville, Illinois.  In his 60 years of priesthood - Father Jerry laughed - cried - comforted more people of all ages than can be counted.  He will be missed by all who knew him.  My first encounter with Father Jerry was in June 1988 - newly assigned to St. Mary Church in Plano, Illinois and St. Patrick Mission in Bristol, Illinois.  I was nervous - a deacon candidate about to meet his new pastor for the first time.  Opening his office door at St. Mary's rectory - my nervousness completely disappeared as I gazed at his darkly bearded face - an almost mirror image of my own darkly bearded face.  At least he approved of beards - and after asking his one question - what did I preach on - a large smile and a laugh of approval - the beginning of a long friendship - he serving as my vesting priest at my ordination as a Permanent Deacon.  Together - especially at St Patrick Mission - we built a parish community with numerous new programs - reaching out to the community - eventually constructing a new parish church in Yorkville - saw it officially designated as a parish - shedding 117 years of Mission status on February 15, 2002 by Bishop Joseph Imesch DD - Bishop of Joliet-in-Illinois Diocese. 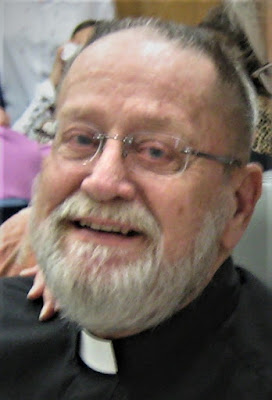 Father Jerry at His 50th Anniversary of Ordination

Father Jerry was not afraid to offer correction to anyone who needed it - always with a smile and words of encouragement.  Shortly after my ordination he politely told me to quit reading my homilies - instead to speak from my heart with the knowledge and love that he knew I had for Our Lord.  Needless to say - my homilies improved very quickly - as did the length - a fact that became a private joke between us.

I am thankful that we were out east at Thanksgiving of 2018 - a time when my wife and I were able to visit him - to spend time talking about the ministry that we shared between the three of us - attending one final Mass together.  His smile - as seen above - permanently embedded in our hearts - he will never be any farther than our hearts and memories.