Everyone of us has internal battles that we have to confront and cope with - some are quite simple and the battle is easily won - others - years to finally come to a peaceful resolution.  Sometime it may have to do with personal relationships - husband and wife - father and son - mother and daughter. Other times it involves occupations - job relationships - work ethics - salary expectations. And even others - in the spiritual arena - what church to join - what doctrine to accept and which to reject - who to follow and what theology to believe. Struggling with faith issues can be one of the most complex and frustrating battles that anyone will ever cope with.  It is never easy - always difficult - keeps you awake at night - and very often ends up with alienation of family and friends. One wonders why God would make it so difficult to make - what should be a simple decision.  The truth be told - He has - He has shared the Truth in Holy Scripture.  It is man who has used that very Truth to confuse the people - twisting words and changing interpretation to their benefit - to their way of thinking. Recently I have been exposed to the concept of "reverts" - those who have left the Church - only to return after a long battle. One such friend - Christina - writes a blog Called The Recovered Catholic.  Another common and similar battle among those firmly entrenched in other Christian traditions - who are seeking a deeper truth in their own faith expression - are those who are drawn away from their tradition to the Catholic Church - one whom I just read is Jason - who writes "I fought the Church and the Church won". 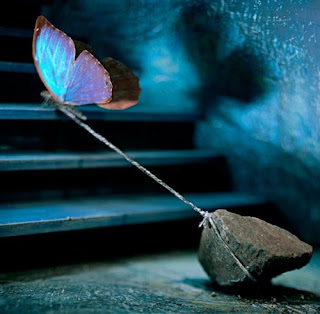 The Internal Struggle To Break Free
Truth be told - Jesus came to us - that "we might have life and live it to the fullest" (John 10:10). He established the Church that mankind would be able to "worship the Father in Spirit and Truth" (John 4:23) His intent was to create one body of believers - He also knew that men would not all accept His message - that there would be those who would accept His words and those who would reject them (Luke 12:49-53) because of God's gift of free will. He did not want to force us into belief - rather He chose to lead us to the waters of regeneration - that we would chose for ourselves and in that decision become true followers of the Way - the Truth - the Life - that He offers each of us.

Posted by Dale and Arlene Metcalfe at 12:43 PM