Luckily for us we had been in Spain on one of our previous European adventures so we already were somewhat familiar with the Madrid airport - it was no problem taking the tram inside the airport to the bank of taxis waiting outside which took us to the train station where we caught our scheduled train to Pamplona.  We had arranged our overnight flight so that we would arrive early enough that we would get the train to Pamplona where we would arrive early enough to get dinner and a good nights sleep before stepping out onto the Camino path.  It was also a bit of luck that our hotel was immediately on the Camino path - so early the next morning we checked out and were sent on our way by the clerk with a hearty - Buen Camino - a phrase that we would hear a hundred times or more during our pilgrimage.  All the locals - clerks - sales people knew immediately that we were pilgrims by the back packs and trekking poles that were our constant companions.  Stepping outside the hotel we spied the silver Camino shell - the symbol of the Camino - imbedded into the concrete sidewalk - pointing our way to Santiago.  When the sidewalk ended and the path was replaced by gravel and dirt the marker was replaced by a concrete pillar with the same symbol and a yellow arrow - both pointing the way onward to Santiago. That Camino symbol and yellow arrow would lead us the entire way to the Cathedral where the bones of Saint James laid. 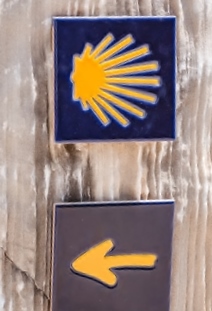 Whenever we take a journey - we constantly look for markers - signs that we are on the right path - heading in the right direction.  Today - the Second Sunday of Lent - takes us from last Sunday's beginning onwards towards the fullness of Lent - our eventual celebration of Easter - the resurrection of Jesus.  Today - another day on pilgrimage - we continue - refreshed by the Eucharist we just  received.