Following is the remainder of the sites visited on Day #6 of our pilgrimage. I had departed the group - they continued an visited the following: Southern Wall Excavations, the Teaching Steps, The Cardo, the Pool of Bethesda, Church of St. Anne, and the Antonia Fortress. 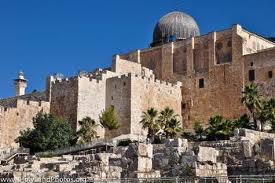 These steps - known as the Teaching Steps - were the entrance to the city from the area of the Old City of David below. It was on these steps that Jesus did most of his teaching and preaching.
. 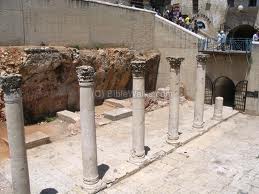 Remains of the Cardo

The Pool of Bethesda is a pool of water in the Muslim Quarter of Jerusalem. on the path of the Beth Zeta Valley. The Gospel of John describes such a pool in Jerusalem - near the Sheep Gate - which is surrounded by five covered colonnades. It is associated with healing i.e. when Jesus told the blind man to wash his eyes. Until the 19th century there was no evidence outside of John’s Gospel for the existence of this pool -scholars argued that the gospel was written later - probably by someone without first-hand knowledge of the city of Jerusalem - and that the ‘pool’ had only a metaphorical - rather than historical - significance. However in the 19th century - archaeologists discovered the remains of a pool fitting the description in John’s Gospel. 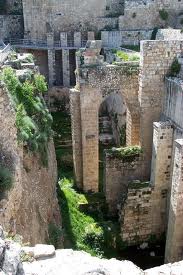 Remains of Pools of Bethesda

The next stop was a visit to the Church of St Anne which was built by the Crusaders over a grotto believed to be the birthplace of St Anne - the mother of St Mary. The church has awesome acoustics and each group visiting is encouraged to sing a song while inside. 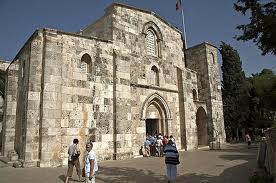 The journey continued to the Antonio Fortress - a military barracks built by Herod the Great around 19 BC - named after Herod's patron Mark Anthony. It is at the eastern end of the great wall of the city on the northeastern side of the city near the Temple Mount and the Pool of Bethesda. 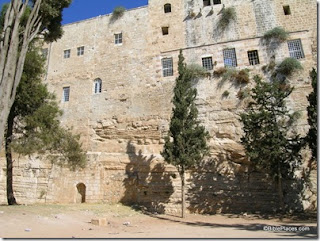 Thus ended this day of pilgrimage. Before I leave this post I would like to show a significant non-Christian site that is very obvious in the Temple Mount. From the farthest areas the large golden dome is very visible. It sits atop an octagonal structure which was constructed by Moslems in the 7th century. Conquering Crusaders reconsecrated the building as a Christian church but soon reverted back to Islam with their defeat. Often referred to as the Dome of the Rock - this place is sacred to three of the world's major monotheistic religions: Judaism, Christianity, and Islam. The site was first consecrated by the Israelites of Exodus. Later, according to Jewish tradition, Abraham prepared to sacrifice his son Isaac upon a rock that protruded from the center of the platform. Later still, upon the same platform, Solomon erected his temple.  After the destruction of the temple the Dome was built. The Dome of the Rock is not a mosque - but a Muslim shrine. Like the Ka'ba in Mecca, it is built over a sacred stone. This stone is believed to be the place from which the Prophet Muhammad ascended into heaven during his Night Journey to heaven. A picture pales in comparison of the structure - you have to see it to understand its significance. 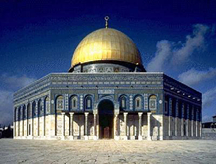 Dome of the Rock

As people of  faith it is not unusual to share in this awesome history of God and his relationship to all men and women.

Posted by Dale and Arlene Metcalfe at 1:50 AM