Day 5 - Today we journey to Bethany - Qumran - Masada and the Dead Sea. Bethany was an unexpected blessing - today we had scheduled an optional visit to Masada and the Dead Sea rather than have a "free" day and we had been told we would have Holy Mass at "some" church in Jerusalem. Imagine our excitement when we learned that instead of just any church we would be going to Bethany to St. Lazarus Church for Holy Mass! Bethany is a short ride outside Jerusalem so 8am Holy Mass here we come. 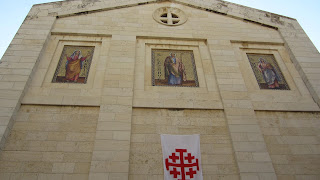 Facade of the Sanctuary at Bethany 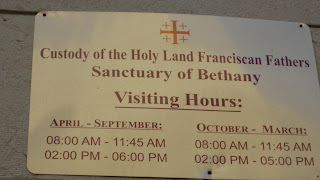 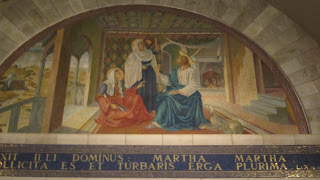 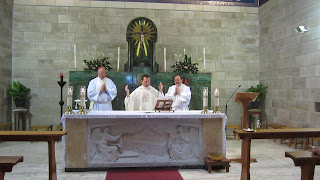 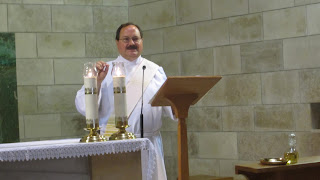 It was at Bethany that Jesus raised Lazarus from the dead - for us to be here when it was not on our itinerary was truly a blessing. 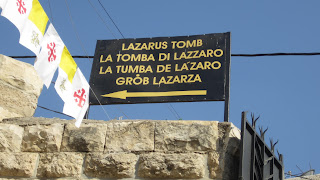 We were surprised by a gentleman offering camel rides so Arlene - always the adventurous one - first let the camel give her a kiss - then took a short ride. 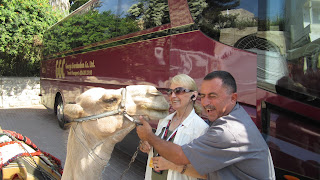 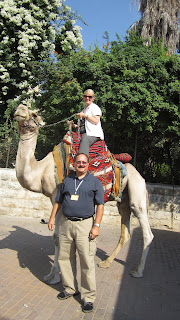 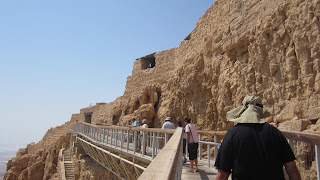 Walkway From Cable Car to Massada 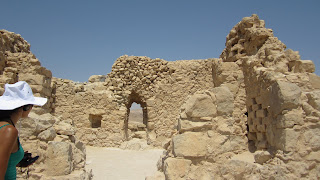 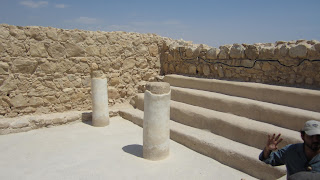 Originally Masada was a winter home/fortress built by King Herod set atop the mountain with a view of the desert and the Dead Sea below. On the day of our visit the temperature was 115 degrees - slightly warm. 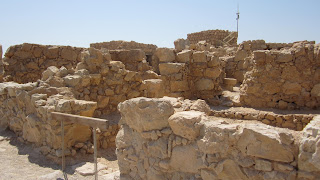 Masada is greatly respected by the Jewish people as the site of the final battle of the First Jewish-Roman War in which the Siege of Masada by troops of the Roman Empire led to the mass suicide of the Sicarii rebels. 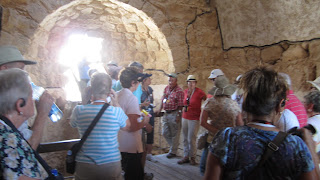 Leaving Masada we next ventured to Qumran - the site of the discovery of the Dead Sea Scrolls. The ruins of the community that lived here are still visible and archaeologists love this site.  Current speculation considers this site as either a fortress or small community dwelling. The makeup of the rock is so soft that using any strong blunt tool a person would be able to carve out a two or three room cave in a single day. 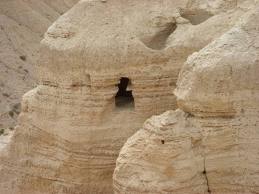 
Our final stop for today was a visit to the Dead Sea - the lowest point on Earth at 1388 feet below sea level. It is the deepest hypersaline (salty) lake in the world. With 33.7% salinity it is one of the saltiest bodies of water - it is 8.6 times saltier than the ocean - the salinity creates a harsh environment in which animals cannot flourish - thus its name. Most of our pilgrims were willing to brave the salt water - floating in the Dead Sea. You can only float because trying to swim would splash water in your face and burn your eyes. Many people also bath in the mud of the sea which is rich in minerals and reportedly has curative affects. 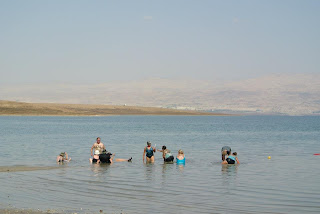 Drying off and returning to our bus we head back to the hotel - thus ending another day filled with God's blessings.

Posted by Dale and Arlene Metcalfe at 10:11 PM