I will venture to guess that those who know me - think I am going to write about doing my income taxes. As a matter of fact - about 98% done - so there - time to write about other taxing issues. One only has to watch their local news channel - pick up a newspaper - browse the internet - visit Facebook or other social media - to realize that there is something seriously wrong with this country.  I will not even wander into the political battle ring - filled with so much human waste - both spoken - real - my commentary on the fiasco - politely called - campaigning. In other news - it has become a daily event - videos - stories - about people acting in unbelievably poor ways - treating each other with such little respect - yesterday's post - that it seems more like a bad movie - poorly written - badly acted. It seems to me - in my humble opinion - that way too many people have taken the kool-aid - swallowed - the lies - hook -line - sinker. Sinking to a very low level in society - rich - poor - alike - no one spared. Police brutality - snipers killing fire fighters - police - erratic driving - for no reason - students beating students - parents leaving babies abandoned - the list goes on and on. 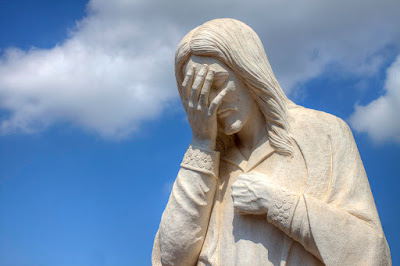 Jesus died on the Cross - for you - for me - for all of us - no distinction between color - race - creed - gender - position in society. Today - looking down upon us - He might ask - why? Luckily - He is so much smarter than the whole lot of us - He knows the whys - wherefores - reasons He did what He did. In God's plan - there is humanity - love between different peoples - cultures. In this Easter Season - we pray - Come - Lord Jesus - Save us from ourselves.