Independence Day - also known as as the Fourth of July is very special to Americans. If you have studied American history - then you know what an ordeal it was for the original settlers to organize and then break away from the control of the British Empire.  The legal separation of the Thirteen Colonies from Great Britain actually occurred on July 2, 1776. The Declaration of Independence was officially approved and signed on July 4th. The significance of the signing of that document is so important that it is celebrated annually - to remind us of how precious liberty really is. One of the hallmarks of being American is the liberty and freedom that is associated with the word American. 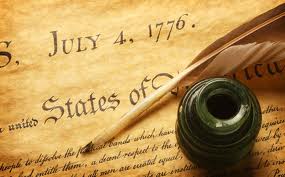 When a person makes the decision to become a Christian their entire life changes. They do not have to get an act approved by congress and rarely is any official document needed to be signed.  The freedom given them by being baptized and accepted into the Christian Church grants them specific rights - liberty and freedom from Satan and sin. Becoming Christian opens doors - opportunities for spiritual growth are numerous and if the decision involved becoming Roman Catholic - they receive the greatest gift the Catholic Church can provide - Holy Eucharist! Another hallmark of being an American is the freedom to worship as we chose. On this day - we praise God that we enjoy that freedom!

Posted by Dale and Arlene Metcalfe at 11:41 PM