Paradise Lost was written by English poet John Milton. Originally it was published in ten books with over ten thousand individual lines of verse. The poem is about the Fall of Man - the temptation of Adam and Eve and their expulsion from the Garden of Eden. When people think that they possess everything that they wanted out of life and then lose it - they too feel like they have lost their paradise. Upon closer look - often what looked like paradise - only existed in their mind and not in reality. We all know the saying that love is blind - and that may apply to anything that we love - so much that we are blinded to the reality of lack of perfection. When the "scales fall from our eyes" and we see what really exists - disappointment settles in and we become unhappy to learn that the paradise we thought we had - never existed at all. 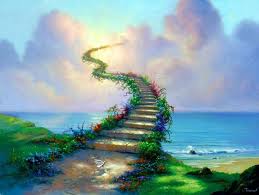 Jesus never promised us a paradise - a perfect world to live in - when He spoke of paradise it was only a promise of what laid ahead - in heaven. He told us that we would experience conflict in this life - that the perfect life was only to be attained in the future with His heavenly Father. Although many people may feel they have found perfection in this life - what is yet to come cannot be comprehended and will be much better than anyone has in their present life. Jesus promised - we trust and belive that one day paradise will be found.

Posted by Dale and Arlene Metcalfe at 11:11 PM