The term task force was originally introduced by the United States Navy to designate a unit or team created to focus on a single defined activity. It is now a standard term used by NATO. Non-military organizations now have adopted the task force concept to work on any focused activity. Giant corporations, small businesses, schools and social organizations form task forces to address and solve specified issues and achieve specific goals. A task force is usually limited to a smaller number of individuals to help facilitate decisions and accomplish stated goals in a timely manner. 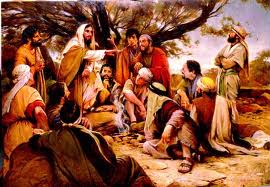 When Jesus recruited his twelve disciples, he was creating the original task force. Their goal was simple - share His Gospel message with anyone they met. Simple enough - open your mouth - speak the Truth - the truth about God's awesome love - about His forgiveness - about reconciliation. Tell everyone that His rules were simple rules - His love available to anyone. Today we have all been called to be His modern day disciples - to share His message - to be His task force.

Posted by Dale and Arlene Metcalfe at 12:10 AM