Auschwitz is possibly the most famous death camp that the average person is aware of. The terrible things that happened there are denied by some as fiction - you only have to be there to know that it is not a faleshood but the truth. As bad as Auschwitz was - Birkenau was a hundred times worse. The magnitude of the atrocities committed at Birkenau are just incomprehensible. Where Auschwitz had some 45 "dormitories" Birkenau had 450! Very few war crimes come close to those committed by the Nazi. 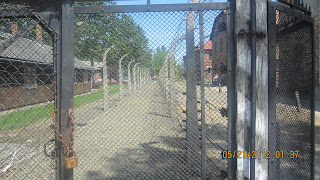 As you walk through these death camps you have to ask where God was in all this? If you listen to the stories shared by those who were held captive there - you will find God in their stories. Things that happened - prayers answered - hearts changed - all those still occurred in the midst of all the bad things. We do not understand why God allows bad things to happen - but they do. On many occasions I have been told that God does not allow bad things to happen - we do. Through our complancy - turning our eyes and heads the other way - not wanting to get involved - these are the things we do that allows bad things to happen. God calls each of us to be activists - not bystanders - in the world around us. God calls each of us to live out our lives and faith as if He was standing right next to us - because He is.
Deacon Dale

Posted by Dale and Arlene Metcalfe at 3:10 PM