In the town of Malbork is the Marienburg Castle which is the largest castle in the world by surface area and the largest brick building in Europe. It was built by the Teutonic Knights - a German Roman Catholic religious order of crusaders. The order named this structure Marienburg - Mary's Castle. In the course of its development and expansion which spanned some 230 years  - it became three castles in one - the High - the Middle - and the Lower castles surrounded by three defensive walls. The first time we visited in 2000 there was no provision for English speaking guides - this year we were provided with English language audio guides that explained the castle in depth and we learned much more not only about the knights but also their prayer lives. Malbork Castle at one time housed about 3000 "brothers" - over the many years it has been occupied by many different groups. Today it is undergoing renovation and reconstruction as more  than fifty percent was destroyed in World War II. It is now a museum and a UNESCO World Heritage Site. 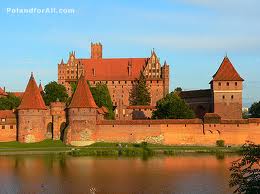 There is something special about castles that peaks my interest. It is not necessarily the size of the structure but the idea that so many people lived and worked in complexes like this is very interesting.  In a way it reminds me of our parish when we do certain events on a large scale. Today - June 10th - is Corpus Christi and at Holy Mass we celebrate the Body and Blood of Christ as given to us by Jesus in Holy Eucharist. As in previous years we acknowledge this awesome moment in the Liturgical Year by participating in an Eucharistic procession that will lead us from the church to the town square and back - all the while with our priests carrying our Monstrance with the Blessed Sacrament in procession as a visible sign of God's blessing upon the people of the parish and the world in general.

As we worship the Real Presence of Jesus in the Eucharist - as we reverence His presence in our lives - as we walk the streets of our town - we pray "Come Lord Jesus Come".

Posted by Dale and Arlene Metcalfe at 7:19 AM