Also known as Auschwitz-Birkenau - Birkenau was the largest Nazi death camp located in Poland. When Nazi forces took over control of Poland and the Polish people, they forced the Poles into slave labor with the promise that if they would cooperate, they would be saved - one of many lies told by the Nazi. The Poles were forced to dismantle their own brick homes in order to supply the bricks needed to construct the "dormitories" in the death camp. Once the buildings were constructed - these very people became the first inhabitants. When viewing the entrance to the camp - one immediately recoginizes it from all the World War II movies. The first time I saw that entrance, I was shocked that it really existed - I had always thought it was a Hollywood invention - yet, here it was in real life! If I had ever doubted the reality of the death camps - this was more proof than I needed. As we walked around this war memorial - you could sense the pain - the grief - the sufferings - that happened here. 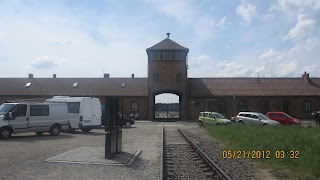 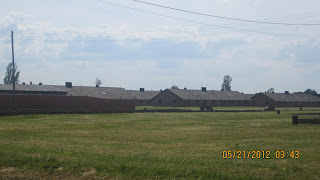 The only thing anyone can say once here - is "Oh, my God!" Anyone of faith who enters here has to say a silent prayer for all those who lost their lives here - the Jews - the Poles - the Italians - and all the others - and even the Germans (yes even Germans who disagreed with Hitler) - were all killed here. The fact that anyone could have survived here and lived to tell about it is a miracle - proof that God never abandons us - rather it is we who abandon Him. If you have been distant from God lately - if you have never made a personal commitment to Jesus - today would be a good day to do just that.

Posted by Dale and Arlene Metcalfe at 7:24 AM