Częstochowa is a small southern Polish town known for its Pauline Monastery - Jasna Gora - the site of the Black Madonna.  It is about a two hour drive northwest of Krakow and is the focus of annual pilgrimages in which thousands of students and young adults will walk from Warsaw and Krakow - taking the better part of a full week to accomplish the journey. Many stories are told of conversion experiences and multiple blessing received on these pilgrimages. One young fellow we talked with told us about a couple that met on a previous pilgrimage and the following year were married by their priest who joined the pilgrimage and performed their ceremony while on the 7 day journey. 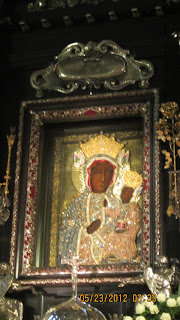 We are told that the  image of the Blessed Mother with Jesus was painted by Saint Luke on a cypress table top taken from the home of the Holy Family. In 1430 the image was damaged by Hussite raiders who made two slashes on the face of St. Mary. According to legend - efforts to cover the scars were unable to be accomplished as the scars would re-appear - thus the decision was made to leave the scars as is - as if God wanted them to remain. Today the scars are clearly visible to pilgrims. We looked for an English speaking tour to join when we arrived at the monastery but none was available. On our third attempt an English speaking Polish priest overheard our request and invited us to join his group of English speaking pilgrims from Ireland and Scotland. As part of their group we were given access to the chapel area immediately in front of the icon where we celebrated Holy Mass with six priests and a bishop. On previous visits, we were only able to stand outside the immediate shrine area - but on this visit we were blessed to actually enter the immediate shrine area. It only goes to prove - it is in His time that He answers our prayers.

Posted by Dale and Arlene Metcalfe at 12:11 PM