Wieliczka Salt Mine - Poland Pilgrimage 2a

The Wieliczka Salt Mine is located in Wieliczka, a small Poland town about 30 minutes outside Krakow. The salt mine began operation in the 13th century and produced table salt continuously until 2007. Commercial mining was discontinued in 1996 due to low salt prices and mine flooding. Today it is a visitor center with approximately one million visits annually. The mine's main attractions are dozens of statues and an entire chapel that was carved out of the rock salt. The salt mine is often referred to as "The Underground Salt Cathedral of Poland". The original carvings were done by three men, none of whom was a trained artist, but their works rival those of more modern professional artists. One special feature is a banquet hall located deep within the mine that is rented out for weddings and other occasions. To gain access visitors are led down a wooden staircase with 378 stairs - the return to the surface is accomplished by a mining elevator that holds 36 people and rises to the surface in 30 seconds. One of the first things carved out of the rock salt was a chapel where miners attended morning Holy Mass before beginning their work day. 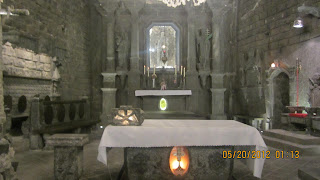 Working in the mine was very dangerous because the shafts were filled with lethal methane gas which is odorless and colorless. The first man in carried a torch to burn off the gas before anyone else entered. Modern ventilation corrected that issue - but in the very early days many men lost their lives because of that silent killer. The Holy Spirit or "Holy Wind" is also odorless and colorless and undetected by normal means - exists around us everywhere we go. God does His best to make us aware of His Holy Spirit - but all too many people ignore His promptings. The Holy Spirit moves and acts in the lives of believers constantly to inspire and inform them about God's ways and commands. It is through the power of the Holy Spirit that Christians are able to accomplish the many tasks that they do. If you are not aware of the Holy Spirit in your life - then you need to pray "Come Holy Spirit Come - Thy will be done."

Posted by Dale and Arlene Metcalfe at 8:25 AM