While traveling throughout Poland - on our self directed pilgrimage - we had the opportunity  to meet and speak with many Poles. Although our Polish was limited we were able to communicate with no difficulty. At the Jasna Gora Monastery - which was discussed in the previous post - we did have some difficulty with the personnel at the information desk. We were persistent and on our third attempt - God surprised us with an English speaking Polish priest from Krakow who was spiritual director for an English speaking group from Ireland and Scotland. He invited us to join his group which we immediately accepted. Shown in the photo below is that group and the Polish priest. 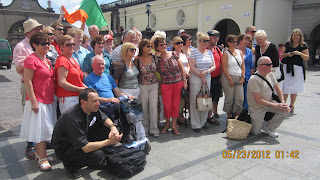 When traveling on pilgrimages in a group - as on our scheduled trip to Israel later this summer - we will have the benefit of a professional guide who will translate for the group when and if needed. When traveling on your own - as we were doing - you have only yourself to rely upon. To some this may be enough to scare them away from attempting foreign travel - but to my wife and I - we jump in with both feet - we study the culture and learn enough "survival language" that we have never had a problem. Because of this we have witnessed many local events and customs that a tour group might miss as not being a "major event" or "site worthy". Shown below is a group of Poles celebrating their pilgrimage to Jasna Gora. We were blessed to also view many first communicants who wear their white garments for an entire week and spend the week traveling to religious sites in celebration of their first communion. 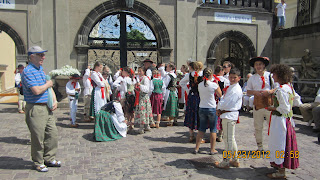 \
When making a pilgrimage to any location - we look for God's presence - not only in the places and buildings that we visit - but also in His people. He has never disappointed us!

Posted by Dale and Arlene Metcalfe at 12:32 PM