In Warsaw, Poland, what is known as the "Royal Route" begins at Warsaw's Castle Square by the Royal Palace and runs south down a street that changes its name four times until you arrive at Wilanów - King Jan III Sobieski's personal residence. Along the Royal Route you will see the Royal Palace, St. Anne's Church, Holy Cross Church, St. Joseph the Guardian's Church, the University of Warsaw, The Presidential Palace, Łazienki Palace  and more. It is a street filled with awesome buildings of special significance.  As you head north towards the Royal Palace the street has been narrowed to allow for an enlarged pedestrian walkway on each side and is restricted to pedestrian traffic only once you enter the Castle Square area. 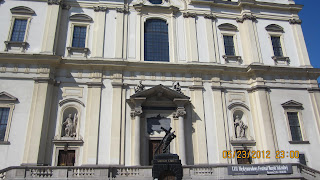 Shown above is Holy Cross Church where Frederic Chopin's heart is entombed in one of the pillars. To worship in this space was a pleasure and a surprise when my wife pointed out the pillar at our side with Chopin's heart in it. 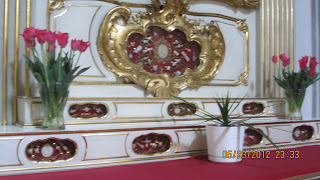 Walking up the street from Holy Cross you first pass St Anne's Church then close by the  seemingly non-descript church of St. Joseph the Guardian's. Upon entering this church - we actually entered and prayed in every church we came across - we noticed that all the altars were adorned with an unbelievable number of relics. As seen in this photo there appear approximately 100 relics! Each of the six or eight altars in this church were also adorned with as many. We did not have time to research as the church was actually closed and under renovation.  Although the Royal Route is quite long and would take hours to walk from beginning to end - the true "Royal Route" - the distance from your mind to your heart is only about twelve inches - and the journey from unbelief to belief can be made in an instant!  Jesus is waiting to walk this route with you!

Posted by Dale and Arlene Metcalfe at 8:55 AM